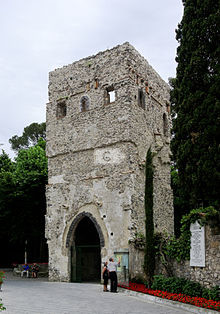 Villa Rufolo is a building in the historic center of Ravello, a town in the province of Salerno, which faces the Cathedral in the Piazza del Vescovado and whose initial layout dates back to the thirteenth century, with extensive nineteenth-century alterations.
In the mid-nineteenth century it was sold to the Scotsman Francis Nevile Reid who oversaw a general restoration, attributing it to today’s setting.
The Scottish Lord, an expert in art and botany, gave the Villa an appearance in line with European traditions and those typical of the late nineteenth century, making it an architectural masterpiece that soon became the site of a great cultural fervor. The monumental complex represents an admirable example of the Arab-Norman style clearly legible in the Cloister which has a double order of columns with characteristic Arab-Sicilian decorations; Medieval elements are present everywhere starting from the entrance tower which houses four statues symbolizing Charity and Hospitality and the barrel vault of the Chapel in the main building.
From the outside it is visible the Torre Maggiore, about 30 meters high, which for centuries has been the testimony of the economic and social power of the Rufolo family and which since 2017, thanks to an imposing restoration and enhancement intervention, houses the Vertical Museum of Villa Rufolo. Visitors through an ascent of about 100 steps can access one of the most suggestive Belvedere on the historic center of Ravello and on the Amalfi Coast.
The villa is accessed through an ogival opening in the entrance tower; after a short drive you reach a widening dominated by the Torre Maggiore: the latter faces the bell tower of the cathedral of Ravello and dominates the terraces (upper and lower) overlooking the Amalfi coast and the Gulf of Salerno which host extraordinary flower gardens for most part of the year. Among the rooms of the villa, moreover, we must mention the upper rooms, also recently restored, which overlook the gardens and often host exhibitions and events.
To remember the visit of the famous musician Richard Wagner in 1880 – who imagined the Klingsor garden in the second act of Parsifal – every year the lower garden of Villa Rufolo hosts, with public success, the Ravello Festival. The association of the name of Wagner with Villa Rufolo was too greedy to not inspire the creation of concerts and musical events. Since the thirties of the twentieth century, there were many performances, especially of the Orchestra of the Teatro di San Carlo in Naples, with programs dedicated to the German master.
In 1953, on the occasion of the 70th anniversary of Wagner’s death, thanks to the contribution of Girolamo Bottiglieri and Paolo Caruso, “The Wagnerian Concerts in the Klingsor Gardens” were born, then taken up again by the Ravello Foundation in 2003 and transformed into today’s Ravello Festival, one of the most famous music festivals in Italy.
The birth of the Wagnerian Concerts would soon have associated Ravello’s identity with the “City of Music”.

Visiting the Amalfi Coast and letting you know the beauty of the area by enclosing everything in an experience that takes your breath away is our target. With 20 years of experience in this sector, our knowledge of the area will allow you to experience it as a local, if this is part of your way of traveling then you are in the right place. Watch our experiences and book yours now, we will advise you on how to make the most of the time of your stay on the Amalfi Coast …